skip to main | skip to sidebar

The First Sarawak Stamp; The Three Cents of 1869 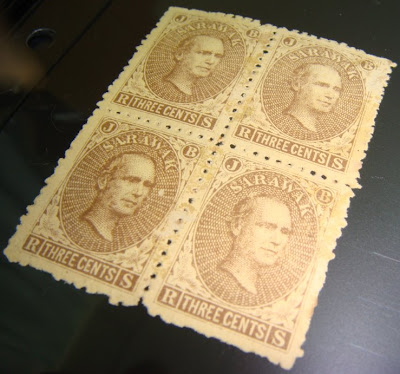 The first Sarawak stamp was officially issued to the public on March 1st, 1869. Of Three Cents denomination, it bore a portrait bust of the first Rajah, Sir James Brooke, despite the fact that he had died some nine months earlier.
Although the reasons which prompted the Government of Sarawak to order a stamp are not known, it is probable that it was intended to serve both postal and fiscal purposes.

The Design
The stamp illustrates a portrait bust of the first Rajah - Sir James Brooke, framed in a narrow colorless oval against an engine-turned background. Above the head, in colorless serif capitals, is the word 'SARAWAK' in a curved line following the arc of the oval. Below is the rectangular tablet bearing the value THREE CENTS in colorless non-serif capitals on a colored background. In each corner of the stamp appears an initial, the upper two enclosed in small colored circles and the lower two in squares at each end of the tablet of value. They read J B R S and represent James Brooke, Rajah, Sarawak. The whole design, in a vertical rectangular format, is enclosed bya thin colored frameline, and measures 26 1/2 mm. x 19 mm. The spandrels in each corner are ornamented with a foliate design and the three-quarter face portrait looks towards the right of the stamp.

The design is the work of the celebrated engraver William Ridgway who was later to be entrusted with the work of designing the second issue of Sarawak bearing the head of Sir Charles Brooke, the second Rajah.
Posted by King Qi at 6:25 PM 2 comments:

The postal rates that had been the subject of the 1874 agreement between the Governments of Sarawak and the Straits Settlements were to take effect from January 1st, 1875. Since a single denomination stamp was considered inadequate, an order was placed for a series of five values - 2 cents, 4 cents, 6 cents, 8 cents and 12 cents, to augment the existing 3 cents stamp.
The order was placed with the same printers who had been responsible for the two previous stamps, Messrs. Maclure, McDonald & McGregor of 37, Walbrook, E.C. & Glasgow and the design remained virtually the same as the 3 cent stamp of 1871, only the value being altered. Although the actual date of issue is not known for certain it is reasonable to assume that the five stamps became available to the public on January 1st, 1875 as planned.
Posted by King Qi at 6:10 PM No comments:

(Above) 1871 "Three Cents"
About two years after the appearance of Sarawak's first stamp which bore the post-humous portrait of the first Rajah, a new stamp depicting the head of Sir Charles Brooke was issued to the public. The exact date of issue is not known, although it must have been early in January 1871 as the following Order was published on January 23rd:

'No more of the old stamps are to be issued from the Treasury, and a notice is to be sent around to the effect that the old stamps will be null and void after March 31st, 1871. Those that possess old stamps can exchange them for new.' - Order by H,H, the Rajah

The Design
The stamp illustrates a portrait bust of the second Rajah framed in a thin colorless circle against an engine-turned serif capitals. In each corner is a square containing the initials C.B.R.S, reading from top left to bottom right and signifying Charles Brooke, Rajah, Sarawak. Flanking the circle at each side is a vertical rectangular tablet ornamented with a design of diamond-shaped embellishments which the corner spandrels ear an engine-turned design. The head of the Rajah faces towards the left of the stamp. The whole design is more square than its predecessor and has an overall measurement of 23mm x 19mm.

Method of Production
The production and printing of this stamp was, like its predecessor, entrusted to Messrs. McLure, McDonald & McGregor of 37, Walbrook, E.C. & Glasgow. The methods employed were, in every way, similar but whereas a single printing stone was used for the 1869 stamp, no less than three were required to produce the large number of stamps of the 1871 issue, as it is believed that a total of 250,000 were printed. Only a small proportion of these can ever have been used for postal purposes, although a considerable number were utilized at much later dates for the production of provisional stamps, both in 1892 and 1899.

(Above) 1871 "Three Cents", Block of 4
They are all different!
There are a lot more to talk about with regard to this stamp, with the many flaws and varieties (different stones, plates and dies used during production). Looking (closely!) at my block of 4 above will tell you they are all different in their little ways - unlike other stamps which are all the same (usually) coming from the same sheet.

I will try to explain. This stamp was printed by 3 stones, each composed of 2 panes of 100 subjects. So there are 600 (!!) varieties. Every single stamp can be plated, meaning that each of the 600 positions has a unique and distinguishing set of lithographic flaws that distinguish it from all the others. The Stanley Gibbons Catalogue (the world's most used and well-known catalogue, which I have used for the valuation of my stamps, as per written about in my previous blog entries) recognizes only a few of the 600 varieties, although everyone one of the 600 varieties is unique and of equal philatelic significance. The Stanley Gibbons Catalogue chooses to list only the very few varieties that are very obvious and have been mentioned in the philatelic press for more than a century.
Qi
Posted by King Qi at 11:17 AM No comments:

New in my collection of Mint Uncirculated banknotes of Malaysia are these two $50 notes of 1982-84.

The 1982-84 new notes have completely new designs to reflect the Malaysian character. The general design is based on traditional Malaysian ornaments, wood carvings and other crafts and flora from various parts of the country, including Sabah and Sarawak. The "tigerhead" watermark in the old series of notes has been replaced with a watermark portrait of DYMM the 1st Yang Di Pertuan Agong (that is to say when you hold the note up under bright light you will see the Yang Di Pertuan Agong's face!).

These two pieces of Uncirculated $50 notes of mine are signed by Abd. Aziz bin Hj. Taha.

Another thing I am happy with these 2 banknotes are that they are of running serial numbers - one following the other. I am adding these to my other Mint Uncirculated RM50 notes scanned below:

(Above) This is the 8.1.2000 series of new banknotes. The first of its kind was released on 20.7.1998, depicting the "Wawasan 2020" theme of the current Malaysian currency note series which reflects Malaysia's economic development and achievement towards a fully developed country. The first series were signed by the Banks' Governor Tan Sri Dato' Ahmad Mohd. Don. My banknote displayed above bears the signature of Banks' Governor Tan Sri Dato'Sri Dr. Zeti Akhtar Aziz.

(Above) ... and this is the latest RM50 banknotes. The first 50,000,000 banknotes of this series will bear the 50th Anniversary logo on the top right at the rear of the notes. Subsequent notes will have the logo stripped.

I also recently added the 21.3.1953 Malaya & British Borneo $1 note in Almost Uncirculated condition. Might blog about it sometime in the future after I have received it.

After some wait, I have finally completed this set of 1934/1941 set of Sir Charles Vyner Brooke stamps. This is the original un-overprinted set of stamps, meaning this set of stamps does not bear the "BMA" Overprint or the Crown Colony Overprint. I will detail both of these Overprinted sets in the future. The 3 stamps I bidded and won on eBay are the most expensive 3 in the set of 26 stamps. Previously I have been reluctant to dish out too much money just to complete this set - but now I am happy it's done!

(Above) This is the $5 value in the set, priced at RM150 in the ISC Catalogue, and £27 (US$53.71) in the SG Catalogue. Usually I would not dish out more than 25% of the SG Catalogue price to get a stamp, but this time I forked out US$31.10. Why? 2 reasons: 1) This stamp is Mint Not Hinged, meaning the gum at the back is completely undisturbed... which is rare because stamps during that time mostly have been previously hinged; and 2) I need this to complete my collection!

(Above) This is the $4 value in the set, cataloging at RM130 in the ISC, and £27 in SG. Make no mistake I have overpaid for this one as well, but for the same reasons as above, I am a happy man.

(Above) This is the $3 value, coming in at RM120 in the ISC and £27 in SG. Stanley Gibbons priced these 3 stamps all at £27 each, when ISC differentiates between the 3, albeit mildly.

I have asked the seller to hold these 3 valuable stamps for me, because I do not trust the postal system in Malaysia enough. Apparently he advised against sending it here as well, because in his words, everything he has ever sent to Malaysia "disappeared without a trace".

So I will get them in Sydney come May.
Sweet.

The Design
The central motif of this stamp which is of rectangular format measuring 21 3/4 mm. x 19 mm. consists of a head and shoulder portrait of Sir Charles Vyner Brooke in uniform. The top of the design is occupied by a name plate bearing the word "Sarawak" on a plain background and having a small scroll just below and to the right inscribed "Postage". The left side shows a design of palm leaves and below, on either side of the central tablet of value, appear tropical leaves and blossoms.

The denomination is in colorless numerals on a solid background of color and lies within an ornamental tablet.

Method of Production
The stamps of this issue were recess printed and the plate was arranged in ten rows of ten impressions. The thin white wove paper used for this series bears a multiple watermark of an oriental coronet presumably adapted from that appearing on the national coat of arms.

Sheets were line perforated gauge 12 1/2 and the lines of perforation cross all four sheet margins. The firm's imprint, Messrs. Waterlow and Sons, Limited, London Wall, London E. C. appears centrally on the top and bottom margins and in the top right corner is printed a serial sheet number.

The ten low values are printed in one colour, it seems clear that a separate printing plate was constructed for each of these denominations. The five higher values were printed in two colours and, for these, a common head plate was used but separate duty plates were required for each. 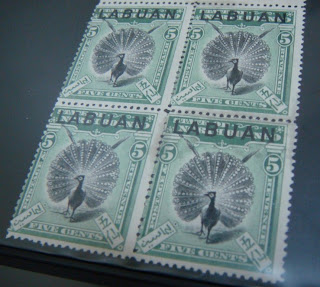 1897 (April) - 1901, 5c Green
This block of 4 is one of the bargains I picked up on eBay. Picking up bargains requires a lot of time in front of screen and a lot of bidding strategies - some naughty some less so. ;)

The most widely used international catalogue, the Stanley Gibbons Catalogue (SG) has this stamp at £50.00 each. At 5 times it will be closer to £250.00.

P/S, I am prepared to take reasonable offers. ;)

Who is King Qi?

King Qi is a qualifying lawyer; a budding entrepreneur; a millionaire to-be; a soccer know-it-all and a stamp investor. You have a stamp collection wanting to sell? E-mail me!

Have Sarawak, North Borneo, Labuan and/or pre-1997 Hong Kong stamps you want to get rid of? Or maybe you have Uncirculated Malaysian, United States and/or Euro banknotes? Scan them and I will be able to make you offers after I have valued them.

Other Pieces in Collection